Quantum optics with x-rays [1] is at present a burgeoning field and its aim is to develop techniques to coherently control x-ray photons. Such control is achieved in the optical range by resonant interactions between photons and atoms, typically with the help of high-Q-factor cavities and lasers. However, with their high frequencies, x-rays are no longer resonant to valence electron transitions in atoms, but rather with inner-shell transitions in highly charged ions, or even with keV electromagnetic transitions in the atomic nucleus. Nuclear transitions have narrow, lifetime-broadened spectral linewidths in bulk solids at room temperature, rendering them very clean quantum systems, with long coherence times.

These desirable properties are due to the large mass and small size of nuclei, as well as the possibility for recoilless absorption of gamma rays and x-rays (the Mössbauer effect). At present, the workhorse system for studies in this area is a very narrow (linewidth on the order of few MHz) room-temperature Mössbauer nuclear transition at 14.4 keV in the stable 57Fe nucleus. Collective effects in the scattering of x-rays off ensembles of identical, indistinguishable nuclei, are exploited to obtain x-ray quantum control.

Within the Collaborative Research Center QuCoLiMa, we plan to investigate advanced two-dimensional nanostructures with embedded Mössbauer nuclei interacting with intense x-ray photon fields from a theoretical point of view. In particular, we are interested in new regimes of collective light-matter interaction rendered possible by the new X-ray Free Electron Laser (XFEL) sources. Our activities will be devoted to the spectral and temporal properties of collective emission from ensembles of identical nuclei, also addressing conditions when each pulse contains several photons which are resonant to the nuclear transition for the first time. This leads to the simultaneous formation of several delocalized excitations, or nuclear excitons. We aim at developing novel ways to control cooperative emission and radiative properties of identical nuclear emittiers such as superradiance, subradiance, transparency, group velocity and spectral response.

Thin-film cavities are special two-dimensional nanostructures which consist of alternating layers on high-Z and low-Z materials. Grazing incidence x-ray radiation couples evanescently to the cavity, forming a standing wave over the cavity layers. The Mössbauer nuclei can be exactly positioned in the cavity field, where they interact with the same cavity mode and see the same phase of the standing wave. This gives rise to very strong and controllable collective effects. For instance, in such cavities an impressive experiment has determined the collective Lamb shift [2].

From electromagnetically induced transparency to Autler-Townes splitting with x-rays

In quantum optics, Autler-Townes splitting (ATS) and electromagnetically induced transparency (EIT) are phenomena that are known to appear in three-level systems. They both yield transparency in the absorption profile of an atomic resonance when a second field coupling to the neighboring transition is switched on, although their physical mechanism and consequently their applications are very different. The similarity between the observed absorption profiles of the two processes has led to intense debate and the need to find discrimination criteria between EIT and ATS [3]. The salient point here is that EIT is a signature for quantum coherence arising from quantum superpositions of nuclear states, and therefore more advanced setups for quantum technologies building up on this coherence will only work with EIT, but not with ATS.

One of the most promising x-ray quantum optics platforms where EIT was reported is a thin-film cavity setup with two layers of resonant 57Fe Mössbauer nuclei. Such nuclei provide resonances in the x-ray regime which are exceptionally clean quantum optical systems. In the layered structure of the cavity, the nuclear cooperative emission is exploited to produce an effective three-level system where transparency to x-rays occurs [4]. The grazing incidence angle determines the nature of the cavity response. Close to a resonance angle, EIT quantum dynamics dominates, while far off-resonance, we expect to see ATS behaviour [5].  At present we are evaluating experimental data from the PETRA synchrotron radiation source which demonstrates the transition between the EIT and ATS regimes. 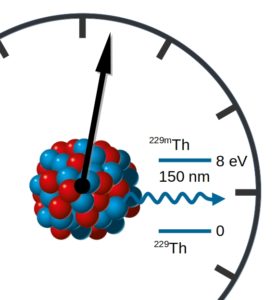 Electromagnetic transitions in the atomic nucleus open new perspectives on the basis of their increased stability and long decoherence time. Due to the much smaller size, nuclei are less sensitive to the environment and their transition frequencies are remarkably stable. These qualities are most promising for the measurement of time and the development of ultra-precise clocks based on a nuclear transition. The lowest known nuclear transition connects the ground and the first excited states in the 229Th nucleus and lies in the vacuum ultraviolet range. The upper state at approx. 8 eV energy is a nuclear isomer, i.e., a long-lived excited nuclear state. Together with laser technology in the vacuum ultraviolet under development, this nuclear isomer may open the possibility to build incredibly precise nuclear clocks that may soon outperform the present atomic clocks defining the global time standard. In addition, this nuclear transition could also be used to shed light on fundamental questions about the time variation of physical questions, the equivalence principle, Lorentz invariance or dark matter search [6].

Our group is investigating theoretically the nuclear and atomic properties related to this low-lying nuclear transition. We are in particular interested in which are the most promising approaches to determine the nuclear transition energy on the required level of accuracy. Due to the small isomer energy, the coupling of the nuclear transition with the atomic shell is very strong. The coupling of the electronic and nuclear degrees of freedom can occur for instance in the process of internal conversion, when the nuclear excitation energy is transferred to an electron which leaves the atom. In the case of 229Th, due to the very low isomer energy, internal conversion can happen only in neutral atoms and expels one of the two outmost electrons from the atomic shell. A possible approach for a more precise energy determination involves ion or electron detection after the excited nucleus has undergone internal conversion. Our state-of-the-art internal conversion simulations rendered possible deducing a more precise isomer energy value in a direct experimental determination of the isomer decay performed by the group of Peter Thirolf at the Ludwig-Maximilians-Universität in Munich [7].

One of our research avenues investigates electronic bridge processes for the driving or quenching of the nuclear clock transition. The electronic bridge is one of the mechanism coupling the nuclear isomeric transition to the electronic shell. We have been working on the prospects of electronic bridge in highly charged 229Th ions.  This process can be used to populate the Th isomer in highly charged ions produced in an electron beam ion trap using a tunable UV laser.  With the absorbed laser photon energy directly related to the isomer energy, this mechanism promises the determination of the latter with an improved accuracy of 10−4 eV and  is feasible under presently available experimental parameters [8]. An alternative electronic bridge process in crystals is also being investigated. In VUV-transparent crystals this process is facilitated by defects, i.e., states appearing in the band gap close to the isomeric energy and caused by the Th doping itself. Excitation rates far above direct photoexcitation can be achieved with current technology [9].

From a nuclear physics perspective, we have been working together with Prof. Minkov from Sofia on nuclear models capable of predicting nuclear properties of this special isomer. The existence of the isomer appears to rely on a very fine interplay of collective and single-particle motion manifested in the actinide region of the nuclear chart. 229Th has an even number of protons and an odd number of neutrons. The nearly degenerated ground and isomeric state can be described theoretically by the collective motion of the even-even nuclear core which presents a complicated quadrupole-octupole deformation, together with the superimposed single-particle dynamics of the additional odd neutron (see Figure). Using this model we could predict the radiative transition strength [10] and the magnetic moment of the isomeric transition [11]. Together with newly available experimental data for the isomer magnetic moment, our predictions suggest that the clock transition is weaker than so far expected, providing a possible justification on why so far all attempts to observe the radiative decay or excitation of the isomer have failed. The determination of the 229Th transition frequency is expected to pave the way for a whole range of applications in the newly emerging field of nuclear quantum optics.

An extensive study of the Th case from a nuclear structure perspective raises the iintriguing question whether the same  dynamical mechanism could manifest in other actinide nuclei [12].   It appears promising to extend the study to other
nuclei in the same or other mass regions in the search for physical conditions under which such an interesting isomer phenomenon may emerge.

Coupling of atomic and nuclear degrees of freedom

For the past decade we have  explored the coupling between the atomic and nuclear degrees of freedom in nuclear processes that involve atomic electrons. Nuclear excitation by electron capture (NEEC) and nuclear excitation by electron transition (NEET) are such examples. These processes can be the most efficient nuclear excitation mechanisms for small transition energies and are expected to play an important role in dense plasmas. The coupling between the atomic and nuclear degrees of freedom is also expected to play an important role in the context of long-lived excited nuclear states, also known as nuclear isomers. Such nuclear metastable states  can store large amounts of energy over long period of time. In an advantageous configuration of the nuclear excited levels, excitation, possibly via the atomic shell, occurs from the isomeric state to an upper gateway level.  Then, the subsequent nuclear decay may proceed directly to a state below the isomer, thus reaching the ground state in a fast cascade. Such a process is called isomer depletion, since it allows for the depopulation of the isomeric state and thus a controlled release of the energy stored in the metastable state. Isomer depletion has often been mentioned in the context of energy storage solutions.

Nuclei may couple to atomic shells if the recombination of a free electron into a highly charged ion leads to the excitation of the nucleus (see Figure). Known as nuclear excitation by electron capture (NEEC), this process becomes increasingly efficient with rising electron density and degree of ionisation. Such conditions are predominant in dense astrophysical plasmas in the interior of stars and supernovae or might be produced by ultra-strong optical laser fields. In dense plasma environments, both nuclear excitation by photoabsorption as well as via coupling to the atomic shells is possible, populating higher nuclear states and in astrophysical plasmas potentially influencing the formation paths for heavy elements. Closer to laboratory conditions on Earth, it turns out that NEEC can be an important process in laser-generated plasmas, wheher at XFEL or optical laser facilities [13,14].  Optical lasers might also be directly used to create plasmas with tailored conditions for the occurence of NEEC. This calls for further theoretical studies for understanding nuclear excitation in plasma conditions, and in particular its role in the process of nucleosynthesis.

Just recently we have engaged on a different avenue in coupling atomic and nuclear degrees of freedom. We investigate how specially designed electron beams can enhance nuclear excitation. Such beams have a spiralling wavefronts and carry angular momentum [15]. The angular momentum aspect is particularly important for nuclear transitions which display in the low-energy region mostly a dipole-forbidden character. Particular multipolarities such as electric quadrupole (E2) or magnetic dipole (M1) together with the recombination orbital impose strict selection rules on which angular momentum components of the incoming electron beam will undergo NEEC. While plane wave electron beams have a fixed partial wave expansion in all multipoles, vortex beams can be shaped on purpose to enhance and control the NEEC outcome [16].